We've had a bit of a hairy day with the internet and downloading videos, but everything seems to be running smoothly now.  We leave for Parma tomorrow morning so I figured I'd better attempt to finish up with the pictures from Venice last weekend.


We switched hotels for our second night to a hotel in the Dorsoduro region as opposed to the San Marco region.  We hadn't yet stayed in the Dorsoduro area, and we wanted to be able to explore around  Accademia and see a side of Venice that was still fairly new to us.  The hotel we stayed at was previously a house (as opposed to the common apartments, like our palace apartment), and it was located right on a canal, about half a block from the campo where we saw the bird eat the other bird.  Sergio actually knew the people who owned the house, and he said they had originally tried to sell it but couldn't get anything near their asking price, so they just decided to turn it into a hotel.  Because of this, the hotel was set up more like a bed and breakfast, and it even had a garden and a yard out back.  This was super cool because A. It's very uncommon to have a yard or garden in a hotel in Venice. And B. It was really lovely to sit outside and eat our breakfast and talk with the other people staying in the hotel (of whom we met a family from Canada who had 2 girls who sang in the Calgary Girls Choir, and were touring all of Italy singing in the big basilicas.  They had sung during mass in Saint Mark's Cathedral the previous night, and they sang for the Dalai Lama before they embarked on this adventure.) 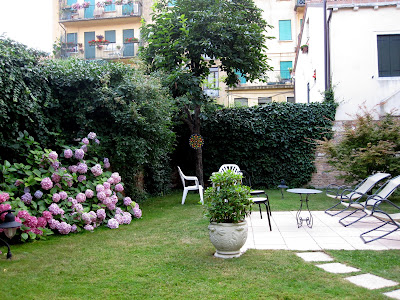 Sorry folks. I've been trying to upload a video for HOURS now, and it seems that with all this crazy technology, some things still move as slow as molasses. Jameson, on the other hand, is faster than a speeding bullet at times, and you can't turn your back on him for more than a second. We were playing upstairs while Christine was doing research for our weekend trip to Parma, and every time I turned my back he would run into the guest bedroom and start climbing on the bed. I'd say about 50% of our playtime was spent on the bed, rolling around on the pillows and freeing his inner bruiser without any of the bruises. His favorite game was to try to get "away" from me before I could push him over and make him fall into the pillows. "No more monkeys jumping on the bed!" didn't really leave any sort of imprint on my logical thinking skills. Grade A care-taker right here! As you can see from the video, jealous Levi HAD to join in the fun, and Jameson is not at all ticklish. Not one single bit.

If you didn't get the terrible play on words from the title, just imagine me letting out a big, long sigh right now.  Christine and I have been overwhelmed all day with this fantastic idea we have, and I've been doing research for the larger part of the day (when I wasn't chasing Jameson around).  Because of all this reading and computer work, I realllllly don't feel like blogging tonight.  Since I have this personal commitment to blog every day (obviously when I have a working internet), I'm just going to share with you some of my favorite quotes about Venice and Italy.  Enjoy!

“Venice is like eating an entire box of chocolate liqueurs in one go.” -Truman Capote

“If you read a lot, nothing is as great as you've imagined. Venice is -- Venice is better.” -Fran Lebowitz

“A realist, in Venice, would become a romantic by mere faithfulness to what he saw before him.” -Arthur Symons


"What is the fatal charm of Italy? What do we find there that can be found nowhere else? I believe it is a certain permission to be human, which other places, other countries, lost long ago." --Erica Jong

"You may have the universe if I may have Italy." --Giuseppe Verdi

"For us to go to Italy and to penetrate into Italy is like a most fascinating act of self-discovery. back, back down the old ways of time. Strange and wonderful chords awake in us, and vibrate again after many hundreds of years of complete forgetfulness." --D.H. Lawrence

"Italy is a dream that keeps returning for the rest of your life." --Anna Akhmatova

"In Italy for thirty years under the Borgias they had warfare, terror, murder and bloodshed but they produced Michelangelo, Leonardo da Vinci and the Renaissance. In Switzerland, they had brotherly love; they had five hundred years of democracy and peace and what did that produce? The cuckoo clock." --Orson Welles

"Open my heart and you will see 'Graved inside of it, Italy.'" --Robert Browning
Today my favorite thing about Italy is:  Other peoples' equally shared passion for Venice.

Christer was able to get home early enough to give us a decent amount of time in Venice on Friday afternoon.  We arrived and were checked into our hotel by about 3, and we had the rest of the afternoon/evening to ourselves.  This trip was especially nice because Christine and I were free to do what we really wanted to do and see what we wanted to see.  We didn't have to worry about Jameson or showing other people around, and since we'd both been to the city before, we each had places and things we wanted to see but hadn't yet had the chance to (I don't know if it's possible to see and do everything in Venice in an entire lifetime).  Friday afternoon we took it easy, and relaxed in true Venetian style.  We chatted with Sergio for a bit, shared a prosecco (or two or three), visited a museum in Saint Mark's Square, enjoyed a nice meal in a quiet campo, and just wandered around the city taking pictures.  I've said it before and I'll say it again.  Venice at night is not something you want to miss out on; It is a completely different and amazing experience.  You haven't lived until you've seen the lights and felt the energy that abounds on the streets.


The museum we visited is located in the Napoleonic wing of the piazza walls, so we had a straight view of the entire piazza from the second story windows that you see in the pictures.  The view was pretty cool, but I left my camera in the hotel, so I, was unable to take any pictures.  Sergio had recommended the museum as a good overall museum for the history of Venice, and boy was he right.  The building itself was simply amazing.  It was completely unreal to be walking around in the former residence of the king of Italy when he visited Venice, and it was just mind boggling to think of who had been there and what had taken place before us.  The museum houses artwork, sculptures, documents, and anything else deemed important to Venice's history, including coins, original street lamps (which look very much like the pink ones they have now), and clothing from the time.

Christine and I normally sit out front with Levi and drink our coffee and chat/try to wake up in the mornings.  Friday I walk outside and Christine is already out with her coffee, watching the cars go by.  She says to me "Good morning!  Just as a warning, the rabbits got it this morning so they're hanging on the line to dry."  Umm...what?  You must not have fully woken up yet, or I'm hearing you wrong, because I'm pretty sure you just said the rabbits are hanging on the line to dry.  Why yes, indeed, the rabbits were beheaded (by Elia), and were hanging by their feet on the clothes line to drip dry before being brought inside.  And sure enough, 3 hours later the doorbell rings, and we open to see Elia standing there with a big grin on his face and a serving platter with a raw, headless, skinless rabbit (that was alive just a few hours before).  Christine graciously accepted the gift, saying "bello! bello!" (beautiful), and brought ole' thumper inside.  We were leaving for Venice in a few hours, so there was no time to cook or eat (Christer's a vegetarian), so we wrapped him up in aluminum foil and he's still hanging out in the freezer, waiting to become dinner.
That was a lovely start to the day, but I don't think anything could prepare us for what we saw later that night in Venice.  We were able to get to Venice early enough to do some exploring before it was time for dinner.  Sergio closed his shop and met us on his way home for a prosecco.  It would have been my third prosecco of the day, so I decided, with a little of Sergio's persuasion, to try a spritz instead.  It is the popular drink in Venice, and really anywhere in Italy, and I hadn't tried it yet, so Sergio ordered me an 'aperol spritz.'  The drink is made with aperol (fruit/herb mixture that the Italians consider "sweet"),  a dry, white wine, and soda water.  I've got to say, it wasn't the best tasting thing in the world, and I had the "sweet" version, as opposed to the "bitter" spritz.  It was almost like drinking a watery juice of sorts, but the aftertaste was really horrible and bitter.  Sergio said even most Italians don't like them at first..."you have to drink many before you acquire the taste."  Nevertheless, I can say I've tried it, and I have a picture to prove it. 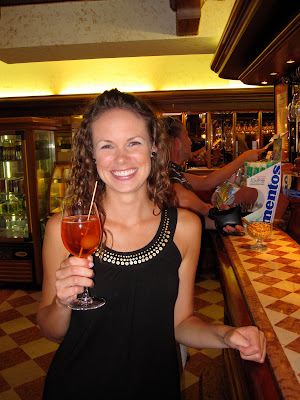