My second day in Italy was Connie’s first, so I had to wake up and find my way back to the airport from Ostia Antica.  I had a cab called for me, and made it to the airport with enough time to grab a cappuccino and croissant before Connie made it through passport control and got her bags.  The Rome airport is not actually in Rome, but about 30 minutes outside of the city, so we had to take a train to the main Rome train station, and then take another train down to Naples for the beginning of our journey.  Once in Naples, we had to take the Metro another stop to get to Giovanni’s Home, the first hostel we were staying in.  This is the part of the journey where we met the other American girls.  Once we made it to Giovanni’s, he had us all sit down and gave us a run-through of the city and the things we should see and do while in Naples.  The hostel was really just your typical European hostel, but Giovanni really made it something special.  He was such a character, and he had such passion for his hometown.  His information session and map drawing really helped us a lot during our stay too, because we had so much we wanted to do and not very much time to do it in.
After talking with Giovanni and putting our bags down, we headed straight back out for the Napoli Sotterranea, a tour of the Naples “underworld.”  Giovanni recommended it, so all 7 of us took his recommendation and went on the tour.  The tour is literally, underground, and takes you through underground quarries from the Roman period, a Greco-Roman theater, cisterns, aqueducts, and caves that were used as bomb shelters during World War II.  The underground theater was actually built inside of and on top of when the Naples population was booming and there was a law that prohibited building outside the city walls.  Part of the theater was later discovered as someone’s apartment storage, so the tour takes you through the old apartment and down the cellar where it was first discovered.  The cisterns were massive, and we were able to see the cuts in the rock where the “little monk” would put his feet to clean debris out of the water with his nets.  Once the cisterns were abandoned, Naples started depositing garbage in the underground caves, and then at the start of World War II, they covered the garbage with rock, and used the area as bomb shelters.  There was one well that didn’t get covered when turning the cisterns into shelters, and that was because the well was located inside a church.  The Italians didn’t think that churches would get bombed, so they didn’t cover the well.  One day the church got bombed, and everyone inside the shelters died. 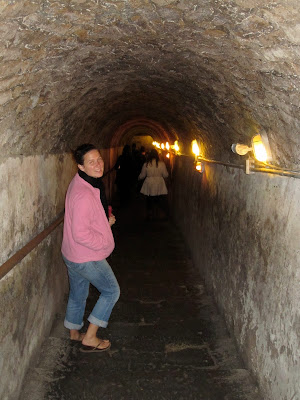 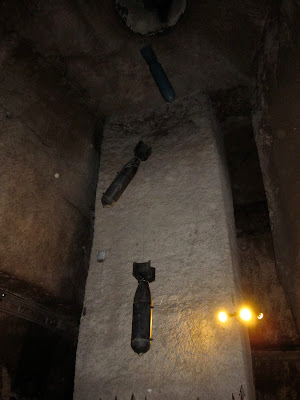 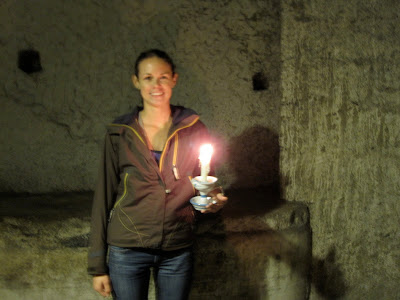 Sorry folks.  Lack of internet coupled with computer issues had led to a severe lack of communication and blogging.  I sincerely apologize.  We had internet at our hostel in Naples, but my computer wouldn't connect, and I wasn't able to figure out the problem and didn't have time to do some serious problem solving.  THEN, in Rome we were hit with some crazy internet nazis who vastly limited our internet using capabilities.  We were told it was "illegal" to provide free internet to tourists because the government needs to have a way of monitoring who goes what and does what on the internet.  Apparently the only way to get internet in Rome is to either hand over your passport and complete all the paperwork for a sim card, which costs lots of money and takes lots of time, OR sign your life over and pay an arm and a leg for 15 minutes worth of internet at a grungy internet cafe.  These people are no joke.  They looked at my passport, copied down all the info off my I.D. into a computer, and then had an entire screen of my information, computer usage, time, websites visited, etc.  It's borderline communist crazyism.  These internet laws are supposed to be in effect all throughout Italy, but the convent turned hostel we're staying in now in Naples has free wi-fi and no scruples.  Haaaa-lle-lu-jah!!


We have been going non-stop since we landed in Rome, and there's no sign of stopping anytime soon.  We pretty much leave the hostel every morning by about 7-8, and don't return until anywhere between 8-10 pm.  Needless to say, sleep is precious.  We have seen and done so much since the last blog post that I don't even know where to start.  Naples was an amazing city with so much to offer.  I feel like we didn't even get to scratch the surface of exploring Naples with the short time we were there.  We definitely took advantage of the pizza capital of Italy, and ate at the "best pizza place in the world" for both dinners we were there, and we've been craving it ever since.  Gino Sorbillo's really is the best pizza in the world, and there is no way on earth I could come up with a just comparison to anything served in America.  The pizza is so thin and is topped with just the right amount of ingredients that it's impossible to pick it up and eat it with your hands.  We kept wanting to return to our natural instincts and pick it up, but it's just not possible. 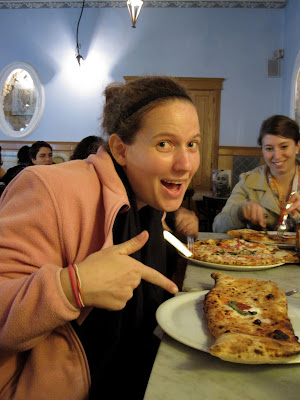