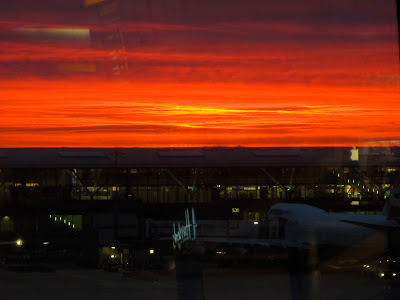 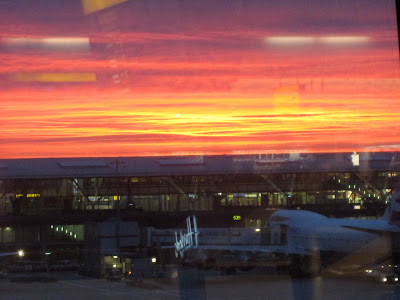 The plane from London to Rome was only about 2 hours, and I, again, slept the whole way.  I swear I’ve found the cure for jet lag, and I’m here to share it with you:

Now that I’ve given you my jet lag remedy, believe me when I say that it’s 8:00 pm here on my first night in Italy, and I am still feeling fine.  I left Orlando at 10:30 am on Monday, watched the sun set over New York city, watched the sun rise over London, and then watch it set again over Rome, and I’m still feeling great.
I managed to find my way to my bed and breakfast, but it was NOT easy.  Through e-mail communication with the owners, they didn't know how to tell me what bus or bus stop to take, but they did assure me there was a bus from the airport to the bed and breakfast.  Or I could just take a taxi for 28 euro.  I get off the plane, get my bag, and head out for the busses.  After what seemed like an hour of wandering around, and a few nice people who spoke English, I found my bus.  Ticket for the bus?  Definitely forgot that.  After all the reading and research I've done, where every single guidebook tells you to not forget to purchase your ticket inside, and I forgot it.  So I had one very mad bus driver, lots of dirty looks, and ended up paying 7 Euro for a 1 Euro bus fare.  C'est la vie.  So once on the bus, it occurs to me that I have no map, no direction, and no clue where to get off for this hotel.  The only thing I know is that it's near the Ostia Antica ruins.  Cue silent foreign country freak out mode.  Not good.  The bus ride seemed like four hours because we were driving during "peak hours," aka, rush hour, which basically equates to 1-4 during rush hour, times 3.  No joke.  People were walking by faster than we were driving.  So we drive along and I suddenly see the Ostia Antica ruins out the window...and we keep driving.  Freak out mode again.  I decide to get off at the next big stop, where there were waiting taxis, who, I knew, could take me to the address.  I didn't want to be stuck on a bus driving around and around in rush hour traffic, and never actually hitting my stop.  So I get the taxi, pay 10 Euro for the 5 minute ride to the hotel, and breathe a huge sigh of relief when I get off in front of my destination.  Lesson learned?  When in doubt, and in absence of a map, pay for the taxi.
So I checked in to the hotel, dropped my stuff, grabbed my camera, and headed out again, to see the famed Ostia Antica ruins.  These ancient ruins from the Roman and Greek period were buried and then uncovered during building, much like Pompeii, but minus the volcano.  They are extremely well preserved, and you can walk through the entire city, standing in what used to be bathtubs, homes, sports complexes, etc. 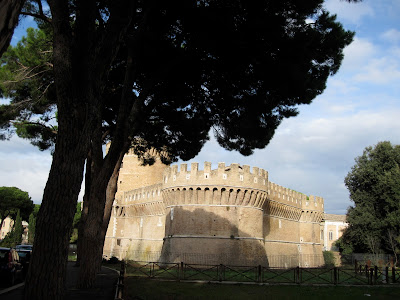 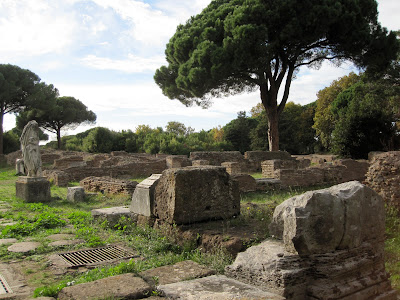 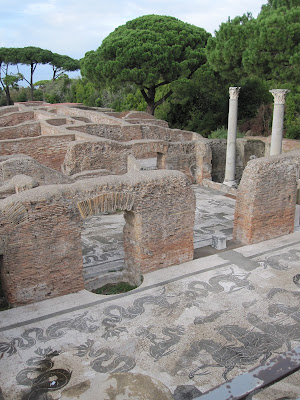 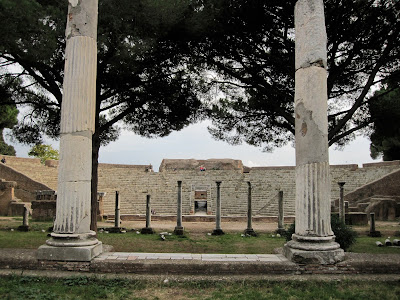 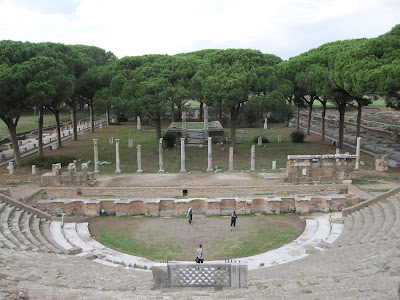 Talk about a brick workout...these things were steep!! 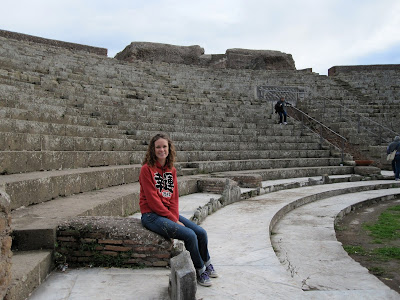 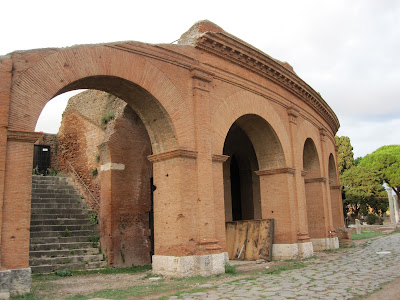 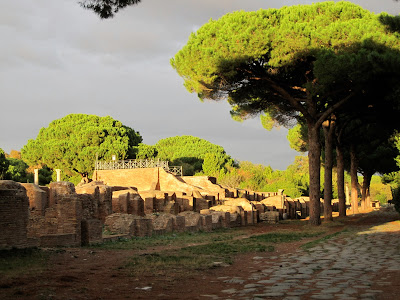 It was a beautiful day, and I was so glad I had time to actually explore this ancient city.  We were allowed to walk all over the buildings, the tile work, and everything, which, I've got to admit, I felt a bit guilty about.  My Simple Shoes may be eco-friendly, but I'm sure they still leave a footprint on structures like these.
Potato chips, Diet Coke, and bed.  I will blog more about the day, evening, and today tomorrow.  Up next on our tour?  Mount Vesuvius and Pompeii.
5 Favorite Moments of the Day: (in no particular order)
1.  Woman in Orlando airport waiting in line for the bathroom (clearly from a southern state, as evidenced in her accent): "Are we not allowed to use the Handicap stalls in Flor-ee-da??
2.  Meeting a friendly English speaking Italian on the bus from the airport to the hotel.  He said, and I think he was just trying to be nice, "I like meeting Americans so I can practice my English."
3.  Watching the sun rise in London.
4. Getting to wear my jacket!!!
5. Ostia Antica.  Beautiful city, and super cool history.
Posted by Unknown at 1:30 AM